In the following diagram each host has 2 HBAs and each storage has 2 controllers. With the given configuration setup each host will have 4 paths to each of the LUNs in the storage. 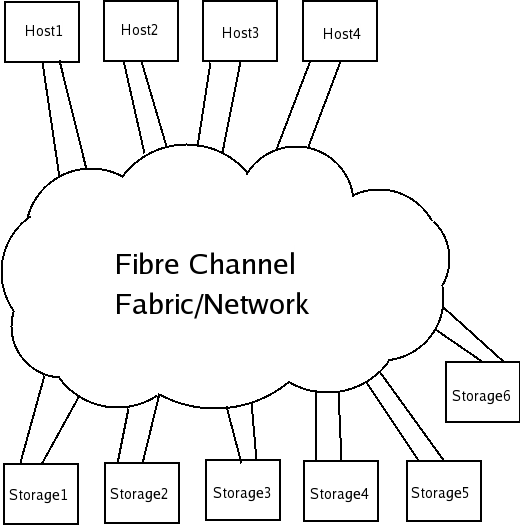 In Linux, a SCSI device is configured for a LUN seen on each path. i.e, if a LUN has 4 paths, then one will see four SCSI devices getting configured for the same device. Doing I/O to a LUN in a such an environment is unmanageable

Device mapper is a block subsystem that provides layering mechanism for block devices. One can write a device mapper to provide a specific functionality on top of a block device.

Multiple device mapper modules can be stacked to get the combined functionality.

Object of this document is to provide details on device mapper multipathing (DM-MP). DM-MP resolves all the issues that arise in accessing a multipathed device in Linux. It also provides a consistent user interface for storage devices provided by multiple vendors. There is only one block device (/dev/mapper/XXX) for a LUN. This is the device created by device mapper.

Path
Connection from the server through a HBA to a specific LUN. Without DM-MP, each path would appear as a separate device.

Paths are grouped into a path groups. At any point of time only path group will be active. Path selector decides which path in the path group gets to send the next I/O. I/O will be sent only to the active path.

Each path has a specific priority. A priority callout program provides the priority for a given path. The user space commands use this priority value to choose an active path. In the group_by_prio path grouping policy, path priority is used to group the paths together and change their relative weight with the round robin path selector.

Path Group Priority
Sum of priorities of all non-faulty paths in a path group. By default, the multipathd daemon tries to keep the path group with the highest priority active.

Path Grouping Policy
Determines how the path group(s) are formed using the available paths. There are five different policies:

Setting multibus as path grouping policy for a storage device in Active/Passive mode will reduce the I/O performance.

Path Selector
A kernel multipath component that determines which path will be chosen for the next I/O. Path selector can have an appropriate load balancing algorithm. Currently one one path selector exists, which is the round-robin.

Path Checker
Functionality in the user space that is used to check the availability of a path. This is implemented as a library function that is used by both multipath command and the multipathd daemon. Currently, there are 3 path checkers:

This refers to the physical state of a path. A path can be in one of the following states:

DM Path States
This refers to the DM module(kernel)'s view of the path's state. It can be in one of the two states:

Path Group State
Path Groups can be in one of the following three states:

UID Callout (or) WWID Callout
A standalone program that returns a globally unique identifier for a path. multipath/multipathd invokes this callout and uses the ID returned to coalesce multiple paths to a single multipath device.

Priority Callout
A standalone program that returns the priority for a path. multipath/multipathd invokes this callout and uses the priority value of the paths to determine the active path group.

Hardware Handler
Kernel personality module for storage devices that needs special handling. This module is responsible for enabling a path (at the device level) during initialization, failover and failback. It is also responsible for handling device specific sense error codes.

A failed path can become active at any point of time. multipathd keeps checking the path. Once it finds a path is active, it will change the state of the path to ready. If this action makes one of the enabled path group's priority to be higher than the current active path group, multipathd may choose to failback to the highest priority path group.

Under failback situations multipathd can do one of the following three things:

This policy selection can be set by the user through /etc/multipath.conf.

Active/Active
Storage devices with 2 controller can be configured in this mode. Active/Active means that both the controllers can process I/Os.

Active/Passive
Storage devices with 2 controller can be configured in this mode. Active/Passive means that one of the controllers(active) can process I/Os, and the other one(passive) is in a standby mode. I/Os to the passive controller will fail.

A user friendly and/or user defined name for a DM device. By default, WWID is used for the DM device. This is the name that is listed in /dev/disk/by-name directory. When the user_friendly_names configuration option is set, the alias of a DM device will have the form of mpath<n>. User also has the option of setting a unique alias for each multipath device.

Support for many of the devices (as listed below) is inbuilt in the user space component of DM-Multipath. If the support for a specific storage device is not inbuilt or the user wants to override some of the values only then the user need to modify this file.

This file has 5 sections:

User can specify the values for the attributes in this file using regular expression syntax.

For detailed explanation of the different attributes and allowed values for the attributes please refer to multipath.conf.annotated file.

Attribute values are set at multiple levels (internally in multipath tools and through multipath.conf file). Following is the order in which the attribute values will be overwritten.

Man page of multipath/multipathd provides good details on the usage of the tools.

multipathd has a interactive mode option which can be used for querying and managing the paths and also to check the configuration details that will be used.

Following are the list of storage devices that have configuration information buil-in in the multipath tools.

This list can be obtained by using the following commands

3.2. Devices that have hardware handler in kernel

4. Install and Boot on a multipathed device

There are advantages in making your boot/root partitions to be in SAN, like avoiding single point of failure, the disk content being accessible even if the server is down etc., This section describes the steps to be taken in the two major distributions to successfully install and boot of a SAN/multipathed device.

Note: This is tested on SLES10 SP1. If you have any other version, your mileage may vary.

The system will come up with the root disk on a multipathed device.

Note: You can switch off multipathing to the root device by adding multipath=off to the kernel command line.

Note: This is tested on RHEL5 U1. If you have any other version, your mileage may vary.

The system will come up with the root disk on a multipathed device.


Note: You can switch off multipathing to the root device by adding multipath=off to the kernel command line.

Procedure above (Red Hat) gives details on how to use linux mpath to install on a multipathed storage device. What if you have already installed Red Hat on a SCSI disk (instead of a dm device) that has multiple paths.


This section gives details on how to move your root and swap from /dev/sd?? to /dev/mappper/mpath??


This procedure is tested on RHEL 5.1. If you are trying on a different release of RHEL, your mileage may vary.

Some of the storage devices, like IBM' DS4K, require special handling for path failover and failback. Until 2.6.27, this was handled at the dm layer as hardware handler. This functionality is available in RHEL 5.3 and SLES11 currently.

They had a drawback that the underlying SCSI layer doesn't know about it and would send I/O on the passive path, which would fail after a timeout and would print extraneous error messages in the console.

This problem was taken care by moving the hardware handler to the SCSI layer, hence the term SCSI Hardware Handler. These handlers are modules created under SCSI directory. These modules need to be included in the initrd image and insmoded before SCSI module is inserted to take full advantage of them.

Following are the instructions to include these modules in different distributions.

Note: If your root device is on a mulitpathed device, then all the scsi hardware handlers will be included in the initrd, following steps are not needed.